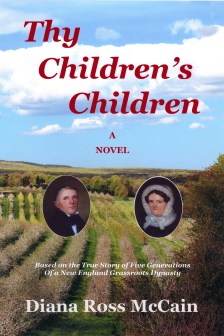 istorical ficton that brings to vibrant life the epic story of five generations of a real New England grassroots dynasty by combining decades of meticulous research with masterful storytelling. The novel is based on the true story of the Lyman family of Lyman Orchards in Middlefield, Connecticut, which evolved from a small family farm started in 1741 to an 1,100-acre agricultural/entertainment complex operated by eighth- and ninth-generation descendants of the founders.

Lyman men and women played roles, often at great personal peril, in political, moral, cultural, and economic movements that shaped American history during the novel’s time period of 1741 to 1871. One generation fought for American independence on the battlefield and the home front. Another crusaded to abolish slavery from the United States. Another pioneered manufacturing and transportation innovations.

Thy Children’s Children also depicts with gritty honesty the daunting challenges of daily life for families like the Lymans from the colonial through the post-Civil War eras. Medicine was nearly powerless against rampant disease. Public schools offered only crude instruction. Transportation and communication were agonizingly slow. The novel also movingly portrays the energy, intelligence, courage, humor, and faith with which the Lymans and their contemporaries countered this dark reality.